In a world of modern crime, it takes both old-school skills, and advanced technology, to solve the case.

Detective: A Modern Crime Board Game is a fully co-operative, immersive, detective experience. This is a game of wits and deduction, a full game night experience – a single game session can last up to 3 or more hours. It is also rules-light, meaning, that the most powerful tool at your disposal is your team, your imagination, and your own mind.

In this challenging, story-driven game for 1-5 players, you will play as group of Antares National Investigation Agency members. You are going to tackle five different cases and solve them in order. Each of them affecting the next. Together they will form a campaign that will put your skills to the test.

If you are looking for a modern detective simulator, this is the game for you.

In the co-operative game Detective, each of you play an investigator working for Antares National Investigation Agency. You are going to gather information, deduce clues, and follow leads in order to solve multiple cases which are represented in the game by a deck of cards. At the end of each case, you will answer questions to gain victory points. You will win or lose the game based on the number of victory points you have earned.

Detective is a cooperative game. All players share the Skill tokens, Stress tokens, and Authority tokens in a common Token pool and use a Time marker to track the passing of time when resolving all Actions. We use the word “you” to represent the entire team. You are going to examine all clues together, and share any benefits of your characters’ abilities.

Detective is a campaign game. The five cases in the box are connected by one overall narrative thread. While playing, you might find clues that seem unconnected to the current case. Sometimes they are dead ends; sometimes they are clues you will need to solve upcoming cases. Don’t be discouraged if you don’t understand the significance of a clue when you first encounter it. Maybe that information will soon become crucial…

Each case has many paths to completion. Due to time constraints, you will never see the whole deck or discover all of the clues. In fact, the average number of cards drawn in each case is only twenty!

After finishing the game, don’t be disappointed that you didn’t go through the entire deck. This is a game of deduction. Ultimately what matters most is how you piece it all together, not how many clues you discover.

Here is the gameplay summary. You can find more details in the rulebook.

Lead cards represent crime scenes, witnesses, found evidence, and other information obtained during the investigation. Each lead in the game is represented by a single card and is identified by a # followed by a number (example: #103). You may only look at the front side when first gaining a new card. You may later be able to look at the back “B” side – but only when instructed to do so.

Each lead card includes its hour value and the Location where it can be obtained.

On the Antares Database, you can find information stored by the police, the FBI, the military, and federal intelligence agencies. When you encounter the “@” character, you need to choose the right section in the menu, then input the correct name or number.

Detective is set in modern times and you, as the protagonists of the game, have access to all data that can be found on the Internet. You can use Google Maps, Wikipedia, or any other source of data you may need. We call this mechanism “Breaking the Fourth Wall.” General Knowledge is identified with the WiFi icon. When you see this icon, you can browse the given topic on the Internet to learn more about it. If there is a certain phrase underlined before the wifi icon, you should run it through the search engine of your choice to see what comes up.

There is not much we can tell you about the story without spoiling the game. The campaign you are going to play is titled “The mystery of the golden watch” and starts with the case “A Man with a Golden Watch”.

The State Department has asked Antares to investigate a potential scandal – they want to know, whether a Nazi war criminal was hiding in the US after World War II. As you may imagine that would be very unfortunate for political reasons.

Top Of The Table – Detective recommendation by Game Informer

Detective: A Modern Crime Board Game Review by Co-op Board Games 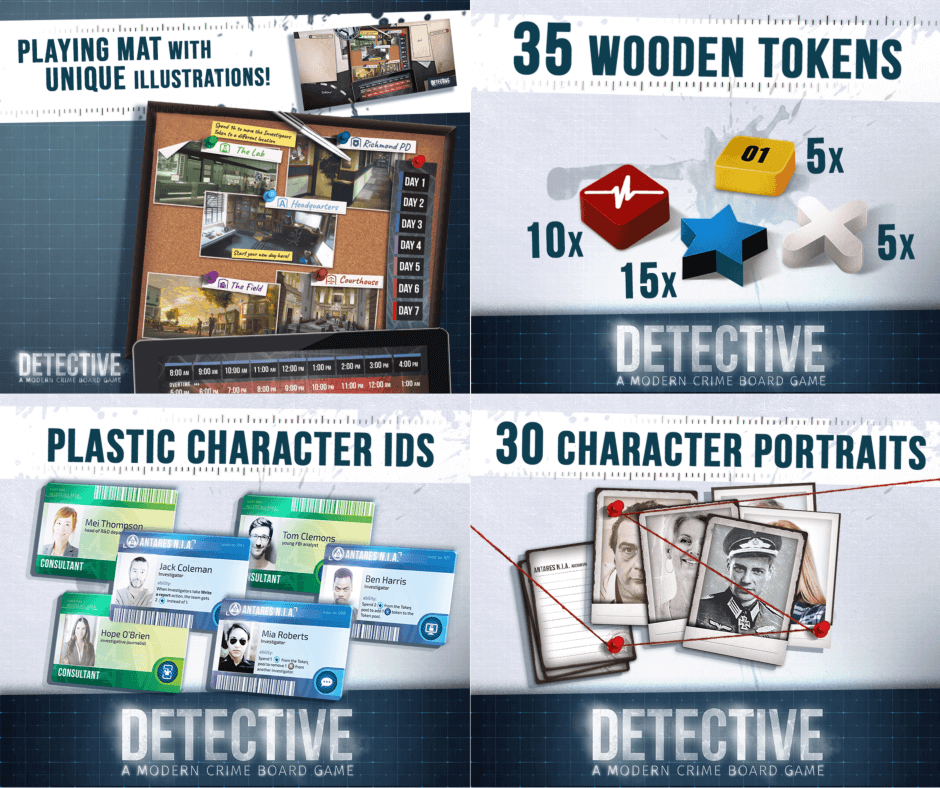 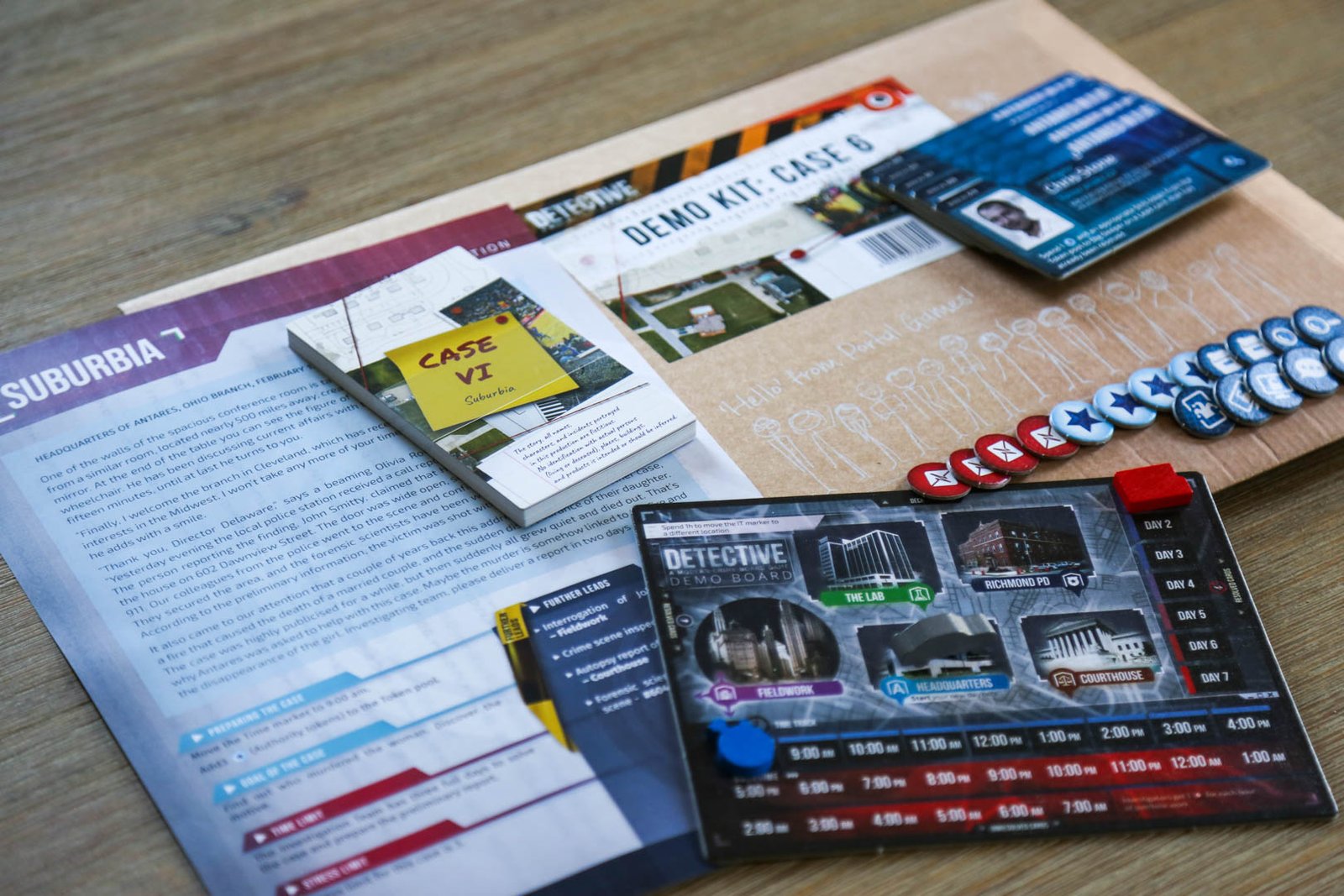 Portal Games is happy to announce the Detective Demo Kit! Now, anyone curious about the Detective experience may go to their local game store and attempt to solve the special demo case: Suburbia!

Learn more about the kit! 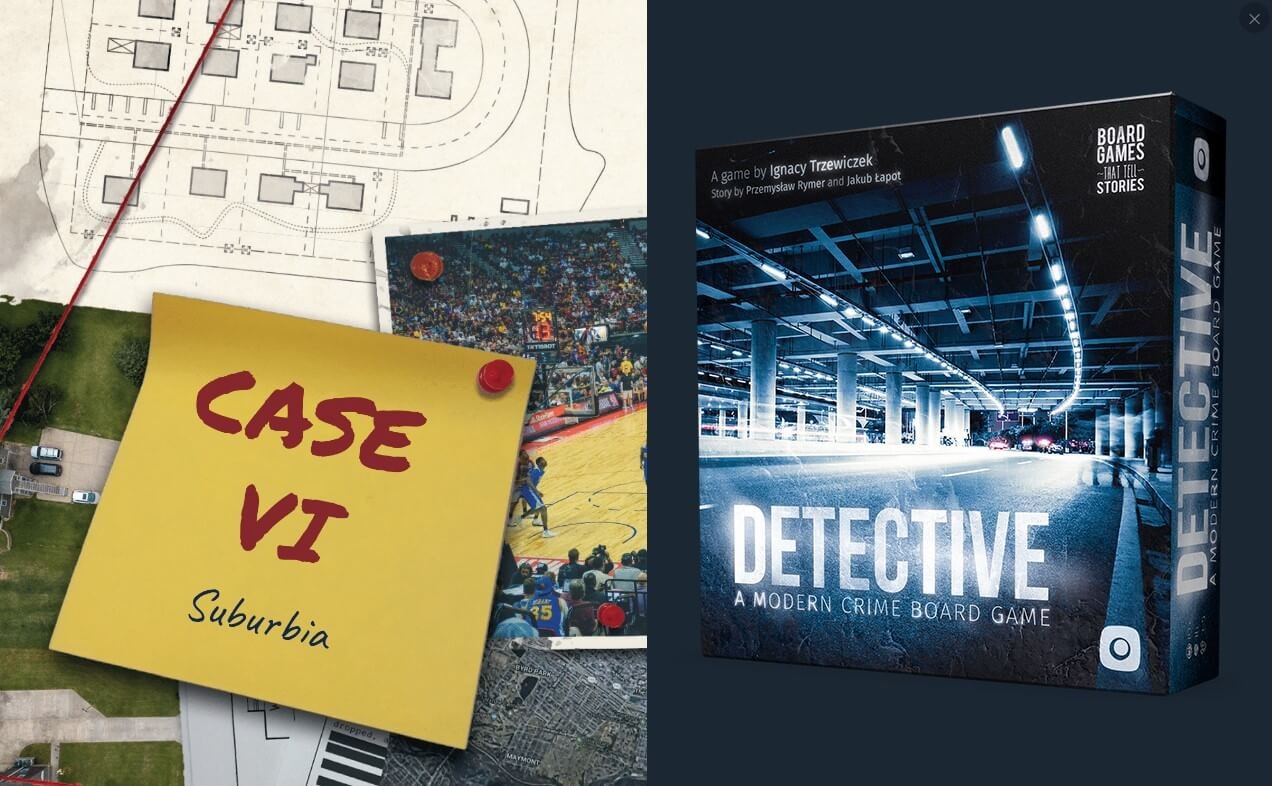 Would you like to play a special convention Case 6, previously available only for those, who pre-ordered the game? Buy it as mini-expansion for Detective base game. Case 6 is a great way to familiarize yourself with the rules of the game and fully prepare yourself for the demanding campaign from the box. But it is also a perfect scenario for a one-off game session. It is a bit shorter and simpler than the other missions, thus we also recommend playing it with friends who are not convinced to devote more than 15 hours to the entire campaign.